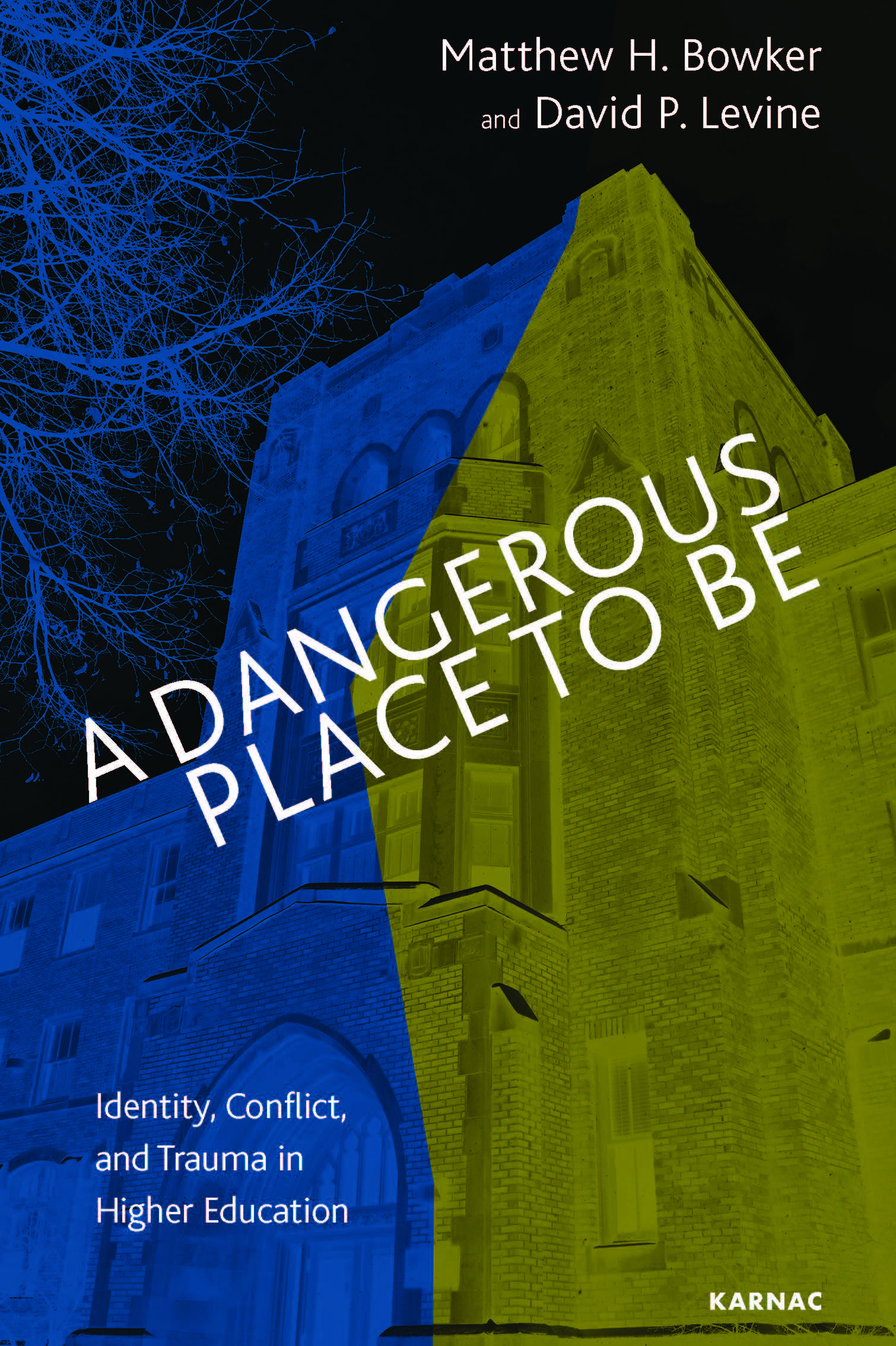 Dr. Matt Bowker‘s latest book, co-authored with David P. Levine, and  entitled, “A Dangerous Place to Be: Identity. Conflict, and Trauma in Higher Education” will be released by Karnac Books in February, 2018.

It has received some favorable early endorsements, included below. You can learn more about the book by visiting its website: http://us.karnacbooks.com/product/a-dangerous-place-to-be-identity-conflict-and-trauma-in-higher-education/39101/.

“In recent years, issues surrounding identity politics on campuses of higher-education have been the subjects of a good deal of commentary. Much of this commentary, unfortunately, has cast off more heat than light. In A Dangerous Place to Be, Matthew Bowker and David Levine not only bring a fresh and lively new perspective to these issues, but — and this is the great achievement of the book — recast the very terms of the question. Focusing on the place of Colleges and Universities as transitional spaces between family and civil society, Bowker and Levine argue that the character of controversies over race, trigger warnings, and campus speech must be understood within the context of, on the one hand, early identity formation, and, on the other, the changing economic functions of the University. This is a rich and ambitious book that raises the level of conversation. It is, at times, provocative, but never fails to be thought-provoking. Whether one agrees or disagrees with the analysis of any of the particular topics it addresses, it will leave one with a more complex sense of what is at issue.”

“‘Campus politics’, on stage, screen, between the covers, and as an everyday way of life has become a core site of the extreme weaponisation of  language in contemporary USA,  the UK and some Northern European social democracies. It is ‘a battlefield’, ‘an outrage’, and ‘a disgrace’. It is ‘generation snowflake at its most narcissistic’; it is ‘the intransigent oppressiveness of the old white patriarchal elite’. It is… well any of these and more: the invective is exhaustive and exhausting. Matthew Bowker and David Levine, though, are not having any of that. In this timely and important volume, A Dangerous Place to Be: Identity, Conflict, and Trauma in Higher Education, they set out a different perspective, psychoanalytical at its core, which uses Winnicott’s Object Relations Theory as the lens through which to examine how early experiences within the family establish identities which may subsequently struggle with voice, safety, self-realisation, and being, and how universities in their own socio-economically imposed re-identification may inadvertently replicate and reinforce these forms of damage. Bowker and Levine insist on the deployment of understanding, not moral posturing, and remind us that the empathetic but objective calm of the psychoanalyst’s intervention could offer spaces for the safe, contained development of self-knowledge more useful to young people than being dismissed as ‘over sensitive’ or taken entirely at face value. Mindful that university staff also feel threatened and frightened, in a study of organizational anxiety that Menzies would have been proud of, collusion is identified as another destructive dynamic that academics in their working world ignore at their peril. Carefully analysed examples of case studies of  recent campus conflicts also provide opportunities to re-evaluate one’s possibly too blinkered and unserviceable position by examining the unconscious as well as social dimensions of these unhappy, pervasive, over-exposed troubles. Ironic as it seems, in relation to a study which so carefully avoids didacticism, to issue instructions, actually I would like to advocate that this book should be made compulsory. Everyone who works in, thinks about, studies in, or believes they have the measure of the contemporary campus really should read it.”

“An excellent work with a critical crescendo, Bowker and Levine trace universities’ attempts to relativize and compartmentalize students’ cultural boundaries into a motley compilation of identities that is then envisioned in a utopian manner. The authors generate a discourse that examines the underlying assumptions about college students as somehow morally defective and in need of indoctrination, illuminate the process by which groups develop a sense of being historical victims as well as a fear of strangers, and incisively outline how the sloganeering of a pro-diversity identity entails unintended and potentially deleterious consequences. These processes have implicitly legitimized voluntary segregation and neotribalism, whereby students are given cues for prejudging one another through their own politics of exclusion. A vitally important work that critically examines how universities have overextended their efforts at creating a fantastic utopia, Bowker and Levine finally reveal that the emperor has no clothes.”

Dr. Bowker is a Clinical Assistant Professor in the Dept. of Interdisciplinary Studies.