Medaille Humanities Professor Dr. Ted Pelton recently contributed to the magazine American Short Fiction‘s focus on Buffalo in its “Things American” series.  Ted’s essay, which has a very literary bent, is called “The Buffalo Sentence (Federman, Coetzee, Creeley)” and is about how he learned as a writer to experiment with sentences from three fiction writers he met in Buffalo.  The essay is found here: http://americanshortfiction.org/2013/08/06/things-american-the-buffalo-sentence-federman-coetzee-creeley/ 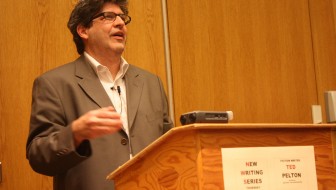