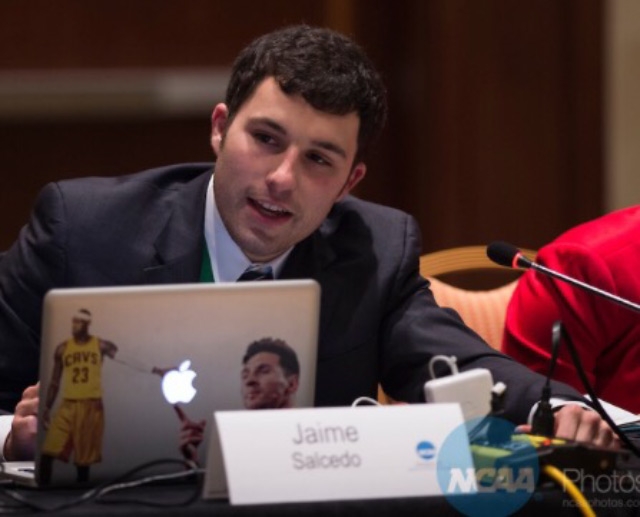 Medaille senior Jaime Salcedo, a member of the NCAA Division III National Student-Athlete Advisory Committee, has participated in a powerful campaign against sexual assault. Salcedo is one of the students featured in a new video [https://www.youtube.com/watch?v=4WCCDcIQjbg] for the “It’s On Us” campaign. In addition, he represented Medaille at the recent NCAA Convention in San Antonio, Texas.

The Akron, NY, native and midfielder for the Medaille Mavericks soccer team was selected to serve on the Advisory Committee during his sophomore year. It is composed of 24 student-athletes from across the country, each representing two conferences that are located in a geographical region.

“Our number one priority is to voice the concerns and properly express the opinions of the 170,000 student-athletes in Division III athletics,” Salcedo says. “This includes speaking on behalf of Division III student-athletes to college presidents, athletic directors, coaches, conference commissioners and executive members of the NCAA.”

Salcedo was originally nominated for the committee opening by Medaille Assistant Athletic Director Laura Edholm and AMCC Commissioner Donna Ledwin. He calls serving on the committee a “life-changing” experience: “While only meeting for a few weeks throughout the year, I’ve been able to form some incredible friendships with other student-athletes from across the United States, friends that I will certainly keep in close contact with when moving forward in my career.”

Salcedo says work on the “It’s On Us” campaign started more than a year ago as part of an effort to raise awareness and take action on an issue of great importance to all college students.

“Sexual assault is a major issue on college campuses throughout the nation, and we wanted to use the resources of the NCAA to create awareness for its prevention,” he says. “It’s truly an honor to have been a part of this campaign and to see the awareness for this important issue spread throughout the nation. It’s our goal to help put an end to sexual assault on college campuses and to create a safer environment for the students we represent.”

Students are encouraged to take the “It’s On Us” pledge at http://itsonus.org.