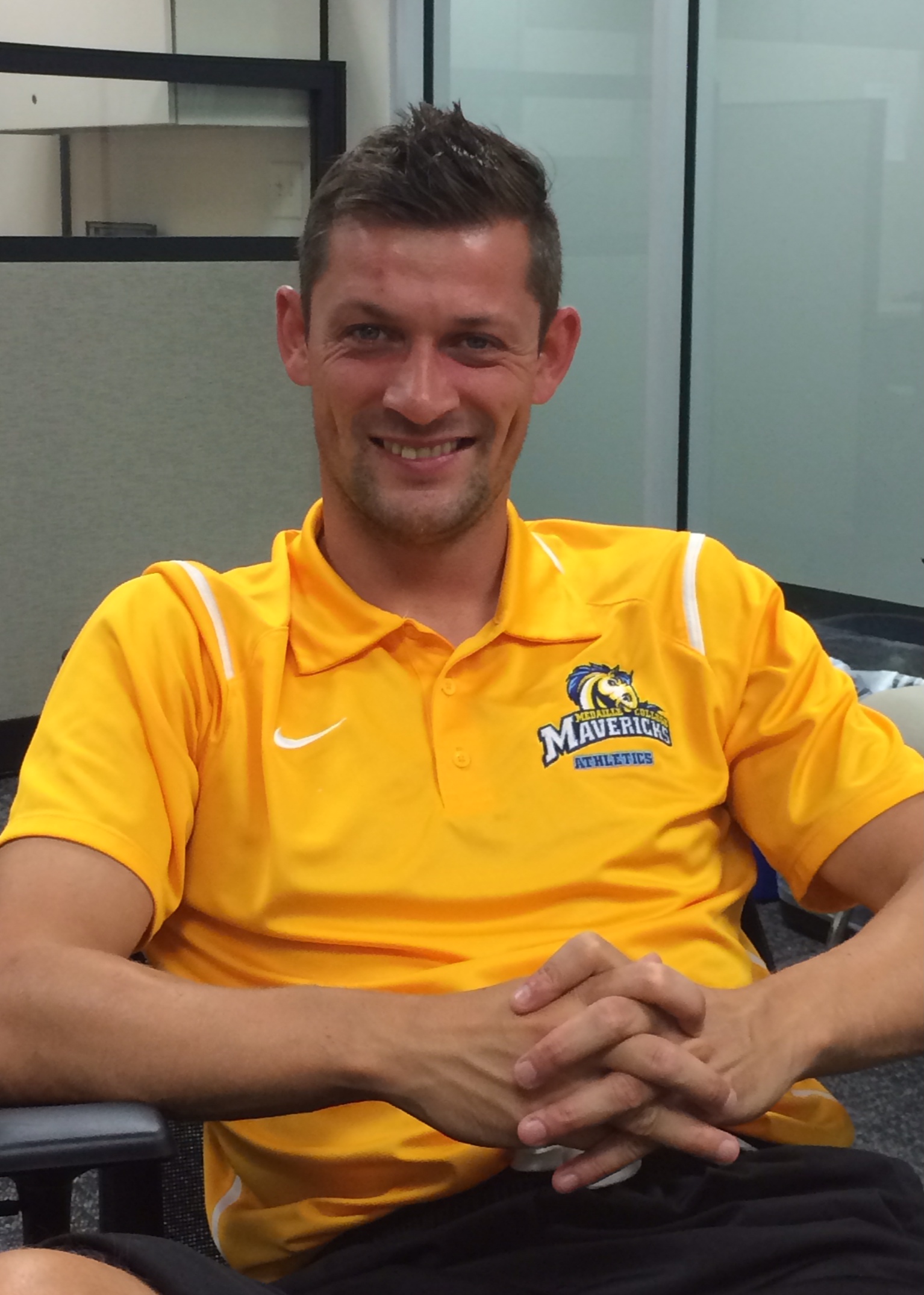 What is your education and background?

I came to the United States in 2001 to study and play soccer at Mercyhurst University. I earned by undergraduate degree in Sport Business Management in 2005. Between 2005 and 2008, I worked in London in recruitment sales, which was very intense.  During this time, I realized how much I needed soccer in my life.  I came back to the United States in 2009 and served as an Assistant Coach for Gannon University for four years, while also serving as an Assistant Coach for the Erie Admirals, a semi-professional team.  Before starting at Medaille, I was the Head Coach for the Men’s Soccer team at Mercyhurst University North East NJCAA.

I started working at Medaille as the Head Coach for Men’s and Women’s soccer and Recruitment Coordinator on July 6th. It was the day after the U.S Women’s National Soccer Team won the World Cup, which I thought was perfect timing.

Tell us about your typical work day…

Having both the men’s and women’s program, I try to put 100% in both teams. We are currently in season.  In the morning, I go through games for the week, operational aspects – make sure everything is all set for practices and games.  I try to schedule games for next season also.  In the afternoon, generally speaking, I am recruiting.  Then I have practice with both teams in the evening.  The days are busy while we are in season, that’s how it is.  But, I do not feel like I work, my job is fantastic!

What is your favorite part of working at Medaille?

It is a private institution, there is an intimacy on campus. I can reach out to different office and be on a first name basis with people.  I describe it as a village feel on campus but with a big city backdrop – it is the best of both worlds.  Medaille has a presence in the city of Buffalo.

What are your interests and hobbies?

Whenever I get the chance, I like to visit the local restaurants in Buffalo.  Food is a focus here.  I like watching live music – Buffalo attracts some good bands.  Also, I enjoy reading about athletes and coaches that are successful in their field and learning about how they excel.

If you could eat dinner with one famous person, who would it be?

It was 26 seconds into my first game, and the men’s team was playing in a tournament in Ithaca. At that point, we have been through pre-season together, we have come together as a team, we’ve run, laughed and cried together. And you just don’t know how everything is going to work, until the whistle blows and the game begins. I tell my players to let the other team know you’re there and it will be a long 90 minutes playing Medaille. One of my defenders takes what I have said very literally and has cleaned out the opposition’s striker. He gets a yellow card and has given away a penalty kick. So, 26 seconds into my coaching debut for Medaille and we are staring down the barrel at penalty kick and I’m thinking to myself, “What have I gotten myself into?”  It was a great penalty kick by the boy from Ithaca and our goalkeeper, Brian Arcara, no exaggeration, pulls off if not the best penalty kick save I’ve ever seen, definitely top 3. It was a fantastic save.  A rollercoaster of emotion! The game goes on, the team was excellent and we go onto win in the extreme heat!

If you could visit any place in the world, where would you choose to go and why?

It’s a hard choice.  Either, Rio de Janerio, Brazil because it would be a good time and I’ve heard their soccer is decent or Hull, England – my hometown to see my family as I do not get there as much as I would like; plus mum’s cooking.