Professor Douglas Anderson of the Division of Liberal Arts and Communications is spending the Spring 2016 semester on sabbatical in the Netherlands. He has been appointed to a guest researcher position at the Huygens Institute, a part of the Royal Netherlands Academy of Arts and Sciences.

The Huygens Institute’s mission is to promote a better comprehension of Dutch culture and history among a broad public. Dedicated to innovation in research methodology, it employs around a hundred researchers, assistants, and programmers. They work with archival texts and sources using new methods and techniques from the digital humanities.

Anderson’s project, Leeuwenhoek’s Cabinet of Wonders, will produce a catalog of the twelve hundred figures that accompanied Antony van Leeuwenhoek’s half century (1673-1723) of letters recording his microscopic observations. The example below, from 1713, shows a red chalk drawing of protists attached to duckweed. The images will be accessible at Lens on Leeuwenhoek, where the dataset will be searchable and the figures will display in pop-up windows that can be moved and re-sized.

Leeuwenhoek’s Cabinet of Wonders is intended as a resource for teachers and researchers in history, science, and visual culture. It will serve as a model for the digital humanities initiative of Medaille’s Division of Liberal Arts and Communications. 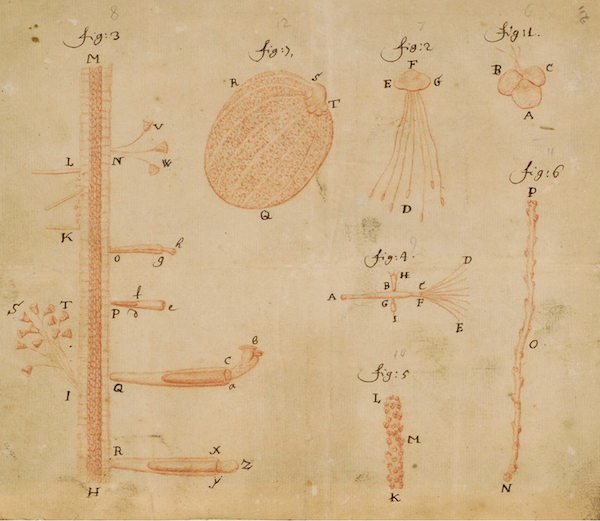